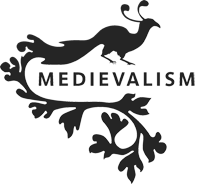 From Nationalism to Activism

The 1848 Monument to Godfrey of Bouillon

Reception and Recreation in the 20th and 21st Centuries

Chivalry and the Medieval Past