I’m writing a letter in the way that a woman of the late-eighteenth or early-nineteenth century might have written to her friend—to share ideas, emotions, thoughts, aspirations—assuming that the letter would be mostly private, but hoping, perhaps, that someone else might read over her—and your—shoulder.

It’s been four years since we started working together on Sara Levy—a woman who wrote such letters, though few of them survive. She was a child of the Enlightenment, but also a child of a Jewish home and a Jewish community. Her family’s wealth enabled her to gain easy access to the non-Jewish world, though it never erased the tensions and prejudices that dominated Jewish-Christian relations in her orbit.

And then there was her music. Having studied keyboard with Wilhelm Friedemann Bach, eldest son of the revered Johann Sebastian Bach, she took on that family’s legacy and sought ways to perpetuate it. But she also reframed it—took control of it as a collector, player, and public performer.

One thought that keeps pushing its way to the forefront of my mind is how relevant the issues in Sara Levy’s world are for our own. Can the discussion of art and ideas bring people together? Can we learn to overcome the prejudices that dominate our own lives, social circles, and society? It’s impossible to say, of course. But I think we must start by confronting the questions as best we can—by meeting Sara Levy and her contemporaries on their own terms. And that’s what our book sets out to do.

Thank you for your letter. I’ve missed writing to you. Four years of Sara Levy and, finally, the book between covers!

I am so very pleased with the volume, which allowed us not only to introduce the extraordinary Sara Levy to the public, but also to explore the complexities of her world, a complexity that is mirrored in our own in so many ways. What seems different to me now is that we are far away from the optimistic spirit of the Enlightenment. You ask whether the discussion of art and ideas can bring people together to help them overcome their prejudices and biases. I don’t know. Yet I don’t think we would have labored on Sara Levy’s World: Gender, Judaism, and the Bach Tradition the way we did if we didn’t believe that by inviting scholars from a variety of fields to enter her salon we were creating a space of tolerance and open intellectual exchange. Our volume really is multidisciplinary. Its contents are a salon gathering! I know that without our symposium in 2014 and the volume itself, I never would have met Christoph Wolff or Steven Zohn and you likely might not have met Natalie Naimark-Goldberg or Barbara Hahn. In that, we succeeded in honoring Sara Levy’s legacy.

When are you going to drop a visiting billet by my office?

One other aspect of Sara Levy’s World has been at the forefront of my mind since our collaboration began: although the collection that she amassed consists of a set of notated musical scores, they were not and cannot be static objects. Her musical texts need to be animated through sound.

To non-specialists, this might seem obvious, but the field of musicology has been so dominated by textual studies that we sometimes lose sight of the fact that music is a living, breathing, sounding art. By playing the music that she owned—much of it older than she was and all of it by Christian composers—we can begin to think about not only what Sara Levy has meant for musical history (that is, she was a preserver of texts), but also what this music meant to her. And that, too, can teach us something about ourselves—how we listen, how we ascribe significance to music.

(As you know, the results of this performance project can be heard on this CD, streaming audio for which is also available through our book.)

That is a marvelous point. I would add that intellectual and social historians need to consider the lived reality of the music, too. When I was composing my introduction to the volume, “Experiencing Sara Levy’s World,” I listened to the CD to help put me into the sonic world of her early modern reality.

The music—its lyricism, complexity, and control—reflected the worldview of the Enlightenment. The maskilim, enlightened Jews, and Aufklärer, enlightened Christians and Deists, inhabited a world of this music, and their writings resonated with its lyricism, complexity, and control. So, too, the tensions between Christians and Jews were reflected in the way they listened to this music—so much of which was written with a Christian ethos. One can’t help but think that Moses Mendelssohn’s critique of Christianity, which he presented through his German translation of the Psalms, was prompted by his discomfort as an observant Jew with the centrality of Christian theology in the baroque music that he loved.

As a scholar of the Enlightenment, I always feel like a bird on a wire. Depending on the way the wind blows, the bird tips toward theological, civic, and social tolerance. . . or toward its opposite. I suppose that Sara Levy felt the same way. 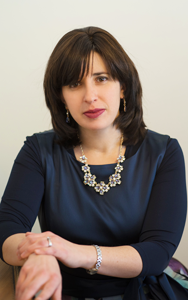 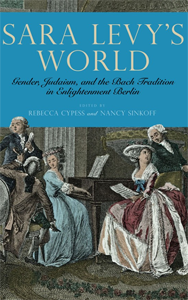 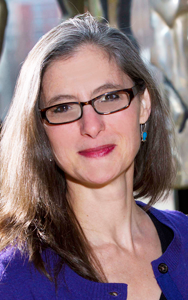 Sara Levy’s World: Gender, Judaism, and the Bach Tradition in Enlightenment Berlin, a rich interdisciplinary exploration of the world of Sara Levy, a Jewish salonnière and skilled performing musician in late eighteenth-century Berlin, and her impact on the Bach revival, German-Jewish life, and Enlightenment culture, was released in June 2018 and is currently available in hardback. Edited by Rebecca Cypess, Associate Professor of Music at Rutgers University (left), and Nancy Sinkoff, Associate Professor of Jewish Studies and History and Director of the Center for European Studies at Rutgers University (right).