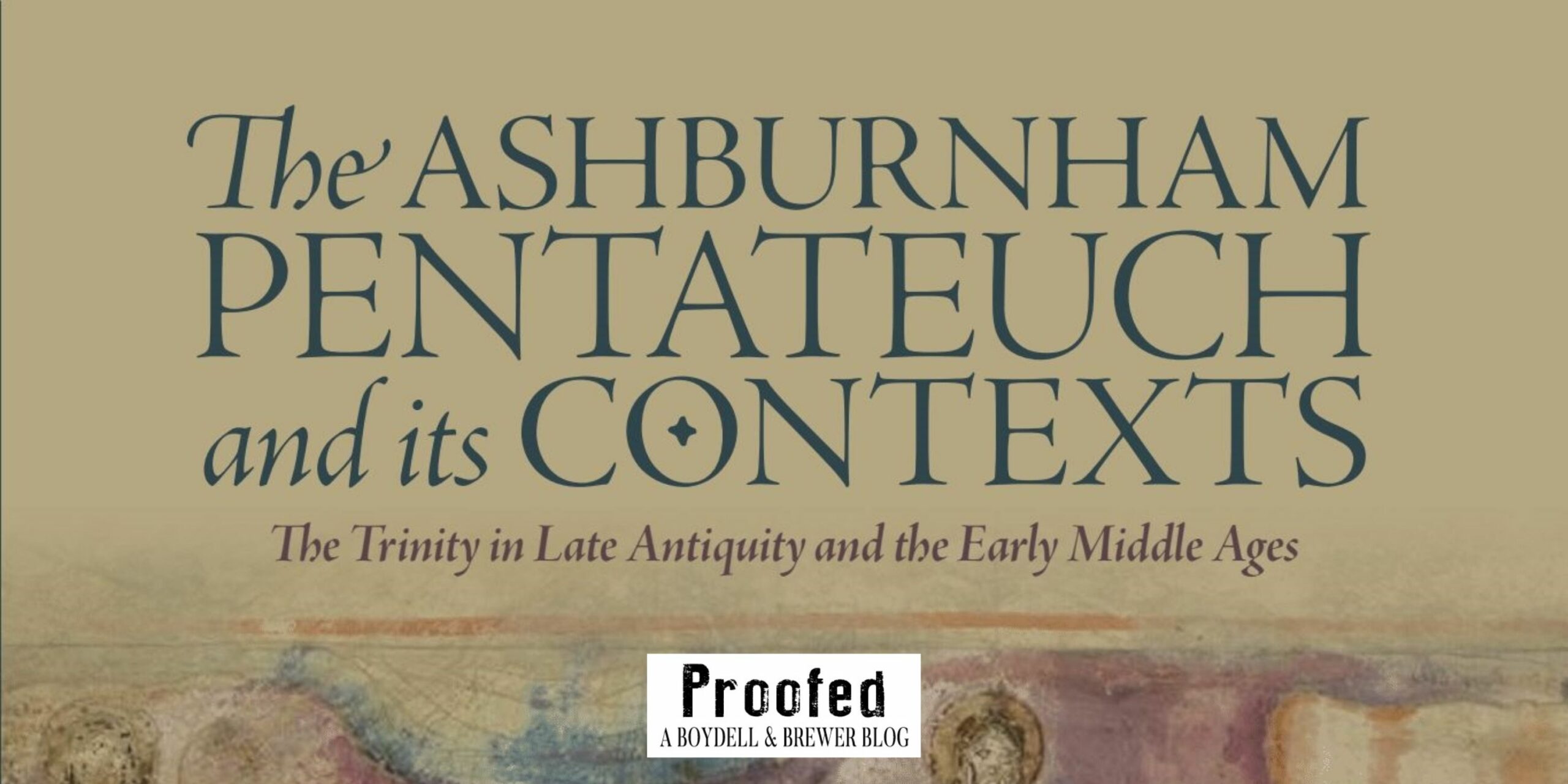 The first time I viewed the miniatures of the Ashburnham Pentateuch, it was quite by accident. I was visiting the Bibliothèque nationale during the very early stages of a research project on Carolingian theology of images and the western response to the Byzantine iconoclastic controversy. I requested microfilm of all the Carolingian illustrated manuscripts and began dutifully making my way through them in the high-ceilinged reading room of the Richelieu branch, when my breath caught at the sight of the Ashburnham Pentateuch’s distinctive images. The whir of the microfilm viewer seemed an appropriate sound effect as I scrolled faster and faster through the manuscript. Even in grayscale, I was enthralled by the busy compositions teeming with animals and people, stacked architectural apertures that were filled with Latin inscriptions, and delicate details such as crops of wheat.

Ironically, I had zoomed past the image that would ultimately become the focus of my book The Ashburnham Pentateuch and its Contexts: The Trinity in Late Antiquity and the Early Middle Ages. In its current state, the Creation image (fol. 1r) depicts four figures in an amorphous landscape representing the first few days of the Genesis creation narrative. It was this image that qualified the sixth-century Ashburnham Pentateuch for my Carolingian research, as the manuscript had travelled from its probable Italian origin to Carolingian France by the end of the eighth century, where this folio was modified in the early ninth century. Based on Bezalel Narkiss’ inspection of the manuscript under ultraviolet light in the 1960s, it seems that the image originally featured anthropomorphic depictions of the Father and the Son in four pairs with a single image of the Holy Spirit as a winged man hovering over water in the middle of the page. Because the order of the Father-Son pair was reversed in the bottom right of the image, the ninth-century redactor, who painted over the righthand figure in each pair, inadvertently removed three Sons and one Father, thereby leaving three Fathers and one Son! (The Holy Spirit was also obscured by paint.)

While we can ascribe the inconsistent removal of figures to a simple mistake, the targeting of the figures of the Son in particular is strange in that of the three persons of the Trinity, the Son is traditionally the most “imageable” on account of the incarnation. In his 1969 article, “Towards a Further Study of the Ashburnham Pentateuch,” Bezalel Narkiss suggested that “the erasure of one Person of God in the Creation may reflect the influence of the Adoptionist controversy in Charlemagne’s time.” While the Carolingian response to Spanish adoptionism was part of the theological milieu, this explanation struck me as unsatisfactory becausethe removal of the Son’s image at creation would not challenge adoptionism. Rather the inclusion of the Son at creation was an assertion of his coeternality with the Father and could be understood as anti-adoptionist.

My subsequent study of the Ashburnham Pentateuch was guided by the central question, “why was the manuscript’s anthropomorphic depiction of the Trinity acceptable in the sixth century and not in the ninth?” In my attempt to answer this question, I took up an interdisciplinary study of the Ashburnham Pentateuch that began with the theological and visual context of its production in the late sixth century. My book considers theological controversies such as Arianism and the Filioque debate, political factors including Justinian’s defeat of the Arian Goths, and Trinitarian and Creation images dating from the fourth to the sixth century. I find that the Ashburnham Pentateuch’s original anthropomorphic Trinity was consistent with the period’s theology, which sought to affirm the absolute equality of the Father and the son. While the manuscript’s anthropomorphic Trinity had a few precedents in early Christian sarcophagi, the image is unique within its immediate sixth-century context, with the next such image not appearing for several centuries.

The second half of the book focuses on the Carolingian reception of the Ashburnham Pentateuch, first by surveying Carolingian depictions of the Trinity in word and text. This assessment finds that Carolingian images of Creation only ever present a single Creator figure, which is consistent with the Carolingian commitment to preserving the unity of the persons of the Trinity in contemporaneous Trinitarian and Christological debates. Carolingian commentaries on Genesis describe a Trinitarian act of creation while carefully emphasizing their unity. I also outline Carolingian understandings of the function of religious images, with special attention to the western response to the Byzantine iconoclastic controversy, as captured in Theodulf of Orléans’ Opus Caroli Regis Contra Synodum. In his critique of the Seventh Ecumenical Council, Theodulf asserted a kind of middle way between the destruction of images and their worship; he argued that while it was wrong to destroy religious images, they were incapable of spiritually elevating their viewer and therefore were not necessary in Christian practice.

As a longtime Agatha Christie fan and lover of mysteries, I was immediately drawn to the Ashburnham Pentateuch’s unknown origins and storied history—including its theft from a municipal library by Guglielmo Libri in the nineteenth century! While my study may not boast the satisfactory ending of an episode of Poirot, it does, I hope, contribute to a better understanding of the Ashburnham Pentateuch’s meaning and influence, as well as of the Carolingian theology of images. We may never know the precise motivations of the Creation folio’s redactor. But through an interdisciplinary examination of the manuscript’s long life, we can appreciate the changes to this particular image as evidence of the complex context in which it was received—one characterized by concerns for theological orthodoxy, iconographic consistency, and political stability, all of which rendered such changes to an anthropomorphic Trinity not only licit, but necessary.

Jennifer Awes Freeman is Assistant Professor and Program Director of Theology and the Arts at United Theological Seminary of the Twin Cities.