Finding ourselves in the midst of December, with shorter, darker, and colder days, employees of Boydell & Brewer have begun wondering about festivities and weather.  Does weather affect the way we celebrate the holidays and the way our traditions are formed? Such questions have led us to explore one of our relevant titles in more detail.

In his book: Seasons in the Literatures of the Medieval North, Paul Langeslag explores how ‘some argue that Christmas has held greater significance in northern Europe than in the Mediterranean where milder winters with more sun hours did not result in the same level of confinement,’. He continues, ‘Moreover, northern countries emphasized further liturgical dates at this time of year and gave them a symbolism of light amidst the dark of winter. Within the Christian framework this is most striking in the Scandinavian observance of Lucia (13 December, corresponding to the solstice in the later Middle Ages)’.

As a native Swede, Digital Marketing Executive Sofie Samuelsson found this point extremely interesting and went on to elaborate on the tradition of Sankta Lucia in Sweden.

Lucia has been celebrated in Sweden for the past 400 years. The ‘Queen of Light’ Lucia herself, is an ancient mythical figure and her role was to be the bearer of light in the dark Swedish winters. This celebration originated from stories told by the Monks who first brought Christianity to Sweden. Lucia was a young Christian girl who was killed for her faith in 304. The most common story told of Lucia is that she would secretly bring food to the persecuted Christians in Rome, wearing candles on her head to guide her in the dark, allowing herself to carry the food. This is one of the foremost cultural traditions in Sweden, and it is also celebrated in neighbouring Denmark, Norway and Finland. The Lucia songs all follow the same theme, stressing the importance of light in darkness: 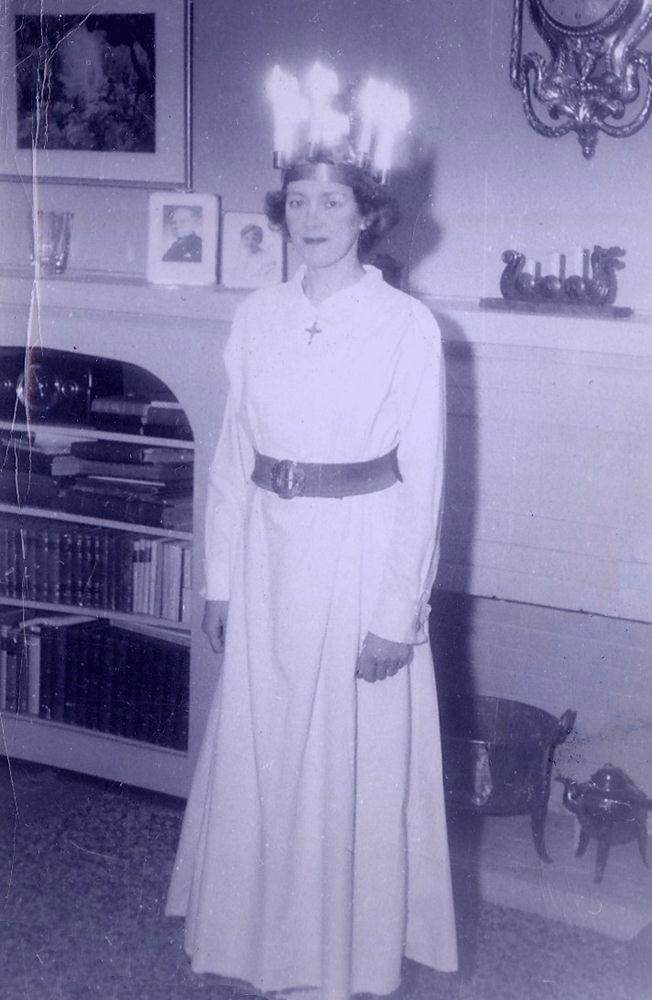 The night treads heavily
around yards and dwellings
In places unreached by sun,
the shadows brood
Into our dark house she comes,
bearing lighted candles,
Saint Lucia, Saint Lucia.

Below, you will find further reflections on seasonal motifs in medieval literature from Paul Langeslag.

Medieval literature is no stranger to seasonal motifs. The poetry of Chaucer is famously preoccupied with the spring, while the hot days of May and June feature more widely in Middle English romance as a setting for fairy encounters. Winter, the season now upon us, provides the backdrop for the late fourteenth-century poem Sir Gawain and the Green Knight, bringing in an array of associations: the Christmas liturgy, old age, the contrast between a festive social domain and the unforgiving weather outside. Its protagonist is given precisely a year’s time to prepare for his doom on New Year’s Day, but the narrator passes over the summer quickly, slowing his pace again at Michaelmas, when Gawain remembers his dreaded mission, and All Saints’ Day, when he announces his departure. His long journey to meet his superhuman challenger leads him through a host of dangers, with an enemy at every ford, but we are explicitly told that he considers winter a greater affliction than war (l. 726). By the end of the poem, it has become clear that not everything is what it seems: Gawain had been at his safest out in the elements, while the greatest peril awaited him in the comfort of his bedroom, within the seemingly safe social domain of the castle Hautdesert.

If Gawain is something of a seasonal outlier in the Middle English tradition, winter assumes a prominent place in Icelandic narrative prose of the thirteenth and fourteenth centuries. The ritual calendar depicted in the sagas marks the start of the winter halfyear with three nights of feasting, while midwinter is depicted as an equally festive occasion, whether in its Christian or pre-Christian guise. Yule is furthermore presented as a time of resolutions over drinks, which then trigger escalations in the social sphere over the course of the year inasmuch as these resolutions may range from wedding intentions to vengeance. The sagas of Icelanders furthermore take a marked interest in revenants, which are firmly tied to the dark of winter. In my book Seasons in the Literatures of the Medieval North, I propose a connection between the literary popularity of winter revenants and Christian legislation on a prompt and proper burial, which could pose a challenge during the winter months. But there is also an appeal to winter ritual that seems to be universal across higher latitudes, where the darkness has historically limited the physical extent of the human domain during the darkest months, while the fallow season has tended to emphasise food consumption over production. From Thanksgiving to New Year’s Eve, Western culture today continues to take the dark season as an occasion to gather in a highly concentrated social domain and feast, not unlike Arthur’s court in Sir Gawain and the Green Knight.

Paul S Langeslag is a lecturer of Medieval English Studies at the University of Göttingen, Germany.