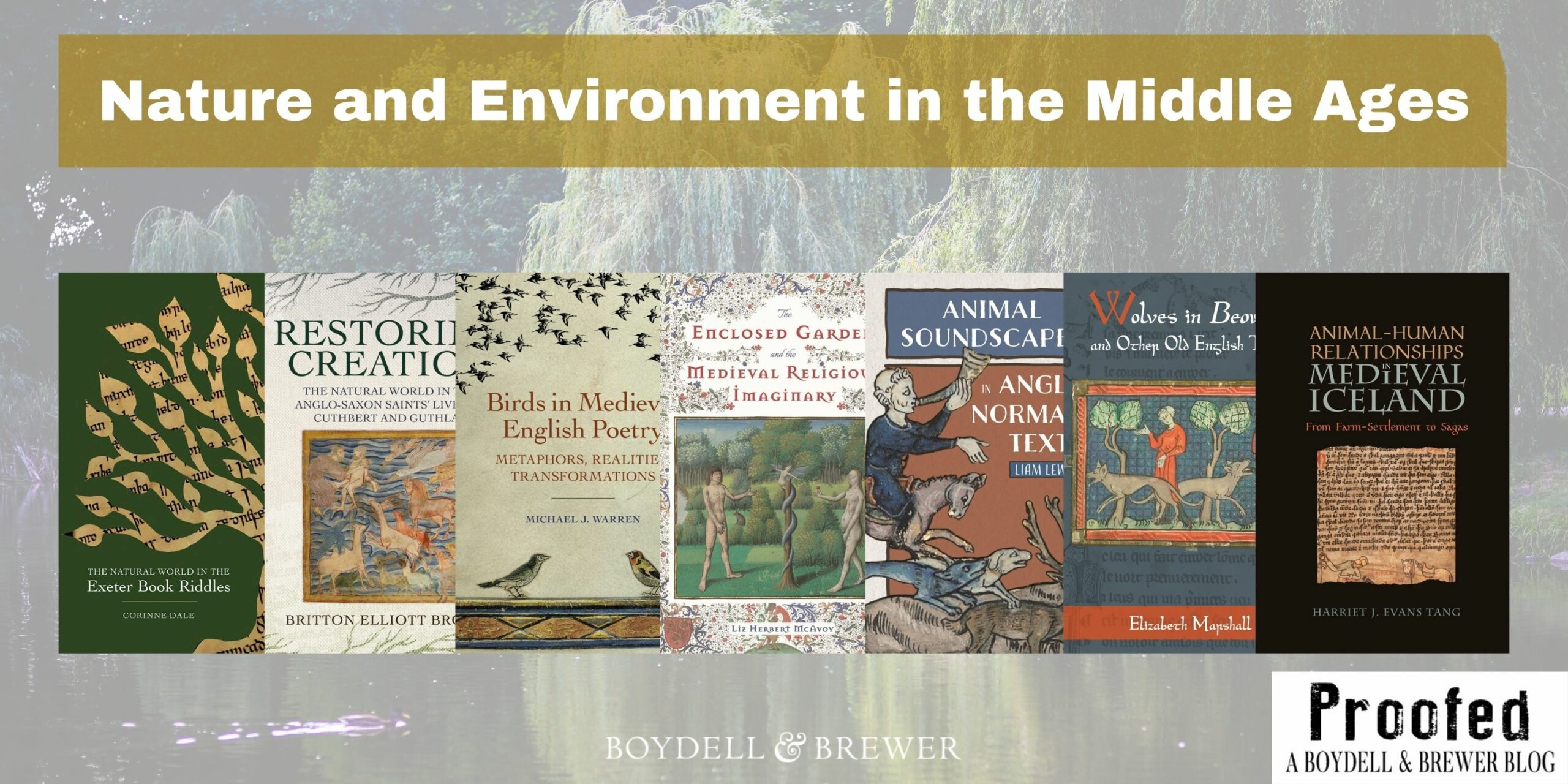 This popular series has already published five volumes with two more to come this summer. To mark five successful years, we are offering a special 40% anniversary discount on the whole series. (Note: Animal-Human Relationships in Medieval Iceland will be available to pre-order from May.) But first, let’s hear from series editor Michael Bintley.

Nature and Environment in the Middle Ages is marking its fifth anniversary with a bumper year of stellar publications: Liam Lewis, Animal Soundscapes in Anglo-Norman Texts; Elizabeth Marshall, Wolves in Beowulf and Other Old English Texts; and Harriet Jean Evans Tang, Animal-Human Relationships in Medieval Iceland: From Farm-Settlement to Sagas.

Beginning with Corinne Dale’s The Natural World in the Exeter Book Riddles (2017), a work which set a new benchmark for ecocritical and ecotheological approaches to Old English poetry, the series has since coved a wealth of evidence from literary-historical and material culture.

Michael Warren, in Birds in Medieval English Poetry: Metaphors, Realities, Transformations (2018), considered the close relationship between the literary and lived experience of avian life in literature pre- and post-Conquest.

Britton Brooks, in Restoring Creation: The Natural World in the Anglo-Saxon Saints’ Lives of Cuthbert and Guthlac (2019), showed how these saints’ lives reflected and shaped contemporary understanding of the place of the human in the environment.

Most recently, Liz Herbert McAvoy’s The Enclosed Garden and the Medieval Religious Imaginary (2021) has focused on the motif of the walled garden in later medieval literature, considering how this image was worked and reworked in the writing of medieval holy women and in female-coded texts.

What is especially distinctive about these works, and those which are in print this year, is a shared commitment to recognising the relationship between literary and artistic productions and the wider material contexts in which they were produced.

Liam Lewis (Animal Soundscapes in Anglo-Norman Texts) breathes life into the aurality of Old French texts, evoking the soundscapes of birds and beasts who surrounded their creators; Elizabeth Marshall (Wolves in Beowulf and Other Old English Texts) tracks through the forests and fenland of early medieval England, wary of the paralysing gaze of the wolf; and Harriet Jean Evans Tang (Animal-Human Relationships in Medieval Iceland) leads us through the farmscapes and multispecies relationships of Iceland in the ages of settlements and sagas, examining the anxieties and affections created by the bonds between humans and non-humans.

Having written my thesis in literature and archaeology, I’m devoutly interdisciplinary, and as so much study of the environmental humanities is concerned with the relationship between different forms of human culture in its broader contexts, it was important to me that the series should seek to represent a broad range of interests within medieval studies.

Particularly important, as this series illustrates, is the research being done by early career researchers, and it has been a real privilege to bring this excellent work to a wider readership at a time when reflection on human-environmental relationships has never been more important. This series will always welcome specialist studies in discrete fields and sub-fields, as well as those which working disciplines, and we invite enquiries and submissions from projects at any stage in their development.