Vernacular Literary Theory from the French of Medieval England: Texts and Translations, c.1120-c.1450, edited by Jocelyn Wogan-Browne, Thelma Fenster and Delbert W. Russell was first published in hardback by DS Brewer in 2016. With the stated aim of opening up “new possibilities for taking English francophony into account in research and teaching”, it presented a full, representative collection of texts and facing translations from England’s medieval French. Anglia called it, “a landmark achievement in the on-going reassessment of the place of French in medieval English culture”. Now that the paperback edition has just been published, we asked Jocelyn Wogan-Browne (Thomas F.X. and Theresa Mullarkey Chair in Literature, English Department, Fordham University, New York, and formerly Professor of Medieval Literature, University of York) to assess its reception and the place it has found in medieval studies.

We’ve been gratified by reviewers’ acknowledgement of Vernacular Literary Theory from the French of Medieval England both as a landmark work of scholarship and as a book for students. Given French’s role as the lingua franca of medieval Europe, the book is obviously useful to people working in medieval French, and helps showcase an under-researched medieval literary culture. But we also greatly hope that the book’s combination of editions and translations with discussions of language, patronage, audiences, modes of reading, and transmission traditions will help more people to integrate French into their sense of culture as it operates within England and beyond, whether or not they want to work in French themselves. Our work was animated by the desire to demonstrate the enormous vitality and variety of England’s French and its texts: it’s a language that remains important in changing ways right through English medieval culture. One of the reviewers rightly regrets that, for all the inclusion of Middle English versions of French-language passages where texts discuss their own production, material, strategies and audiences, the work of integration isn’t fully performed in this book (R. Critten, Anglia 135.4 (2017): 751-54). Indeed not, but then, giving a picture of French textual production and its implications in its long career in England has itself taken 600 pages. We hope these pages create a platform for further exploration and integration. For, as the same reviewer acutely notes, language choice is here revealed in a post-nationalising way as merely one issue among others: patron, audience, historical and social situation are equally important in medieval England for texts’ sense of what they’re doing.

We often get flak for our term ‘French of England’, in spite of the disclaimers and warnings we always make about this label. It’s a deliberate, political choice on several levels. The institutionalised nationalism of university literary study was still so strong around 2002 when French of England teaching and publishing programmes began that there was a sense of clash or at least frisson to ‘French of England’ that made it memorable. The term ‘French of Britain’ seemed unsuitable as there had been little research on the Frenches of Wales and Scotland (if a bit more on Ireland), and we were unwilling to claim ‘Britain’ while effectively subsuming these cultures into ‘England’ (better to point to a gap than to paper it over). And in 2002 the term ‘insular French’ had connotations of technical and specialist linguistic study. Things have changed since then: with increased awareness of French in England, ‘insular French’ has become a cultural, as well as a linguistic term (especially after Ardis Butterfield’s important Oxford monograph, The Familiar Enemy: Chaucer, Language and Nation in the Hundred Years War, in 2009, 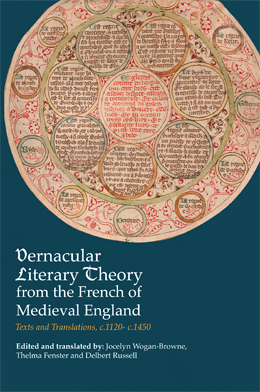 the same year as our Language and Culture in Medieval Britain: The French of England, c. 1100- c. 1500 with Boydell and Brewer). British Frenches now have more profile: William Calin has published The Lily and the Thistle: The French Tradition and the Older Literature of Scotland (Toronto, 2013) and a magisterial book by Keith Busby on French in Ireland and Ireland in French appeared from Brepols in 2017. We hope Vernacular Literary Theory from the French of England, will, like its Middle English prequel, The Idea of the Vernacular: An Anthology of Middle English Literary Theory 1280-1520 (Penn State and Exeter, 1999), generate more work of many kinds (perhaps including some re-writing of Idea of the Vernacular’s sense of how English-language choice works, and perhaps, also, modification of the ‘French of England’ label when that term has fully served its purpose).

Our publisher has been crucially helpful to the book’s aims in many ways. And that Boydell and Brewer is offering the paperback version of this large volume for $34.95/£25, shrinking to $26.21/£18.75 with conference discounts, is an extraordinary achievement. It brings to fruition a dream that would have been impossible without such an adept publisher- to make it possible not only for scholars, but for students, especially graduate students in English and French, to own and browse and refer to this book.