Dr Kate Philip is a Senior Economic Development Advisor in the Government Technical Advisory Centre (GTAC), an agency of South Africa’s National Treasury, and, through the International Labour Organisation, she has also been supporting the government of Greece in the roll-out of a public employment programme.

Your sub-title refers to ‘mineworkers, job creation and enterprise development.’ What is the link between these issues?
In 1987, against the backdrop of the struggle against apartheid, the National Union of Mineworkers (NUM) embarked on the longest and largest national mineworkers strike in South Africa’s history. It took a heavy toll on the mining industry, but NUM paid a heavy price too, with some 40,000 workers being dismissed.

NUM – under the leadership of Cyril Ramaphosa at the time – then took the decision to start a job creation programme for these ex-mineworkers, in mainly rural, mine labour-sending areas across southern Africa. This was – and still is – an unusual role for a trade union to play, but NUM invested significantly in this contribution to a ‘social plan’ to remedy the negative social impacts of the migrant labour system and of job losses on the mines on these mining communities.

I was appointed to head NUM’s job creation programme, which was later spun off into a non-profit organisation called Mineworkers Development Agency (MDA). Markets on the Margins starts with a social history of the turbulent aftermath of the strike, and then tells the story of how NUM’s job creation strategy developed over the next decade as we grappled with how to create jobs through enterprise development in these economically-marginalised areas: with lessons from each successive phase of strategy.

How did the process begin?
At first, the focus was on establishing worker co-operatives. About thirty were established, with a range of lessons, not only from those that failed, but from those that succeeded too. Somewhat to our surprise, debates over co-op ‘degeneration’ that we assumed were mainly a developed-world concern affected the NUM co-ops too – for reasons explored in the book. In the end, however, the main problem was that despite huge effort, competitive factors meant the co-ops were highly constrained in their ability to absorb labour – while jobs were being lost on the mines at an escalating rate. The project-level focus of the co-op strategy was unequal to the task at hand. 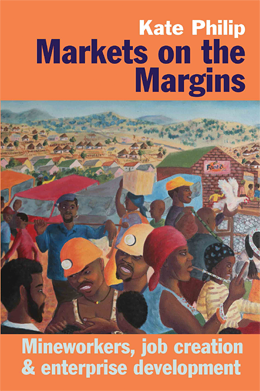 So how did the strategy change?
MDA shifted away from a project-based approach to focus on the delivery of business development services through entities called Development Centres. Eight of these were established, providing a range of services that included technology transfer hubs, business supply stores providing access to inputs such as packaging supplies that were not usually available in these areas, product development support, market access facilitation, training, counselling and access to credit. The focus was on ‘local production for local consumption’, trying to increase the circulation of money in the local economy. The centres served all comers in local communities – including co-ops – and our outreach expanded exponentially.

Despite some notable successes, the rate of enterprise failure was, however, depressingly high. Why was this the case? On analysis, it became clear that even in these remote and marginalised areas, small enterprises operated in the shadow of South Africa’s highly concentrated core economy. Small enterprises producing sunflower oil, maize meal, school uniforms, fencing, bread and other products in local demand were in direct competition with the giants of the South African economy, whose distribution networks reached deep into even these areas. This required a shift in strategy, away from the ‘local production for local consumption’ model, to identify alternative market opportunities.

While we were grappling with this issue, however, a paradigm shift in the small enterprise support sector was taking place internationally, with many donors newly enamoured with an approach called ‘making markets work for the poor’ (M4P). In the earliest, crudest versions of the approach, a key part of doing so supposedly involved removing subsidies from business development services. Our Development Centre model came under harsh critique, because not all support activities operated on the basis of full cost recovery. While we ‘critiqued’ right back, the intensity of debate forced us into a new level of engagement with the role of markets in development, with new – and sometimes counter-intuitive – insights and lessons for us here too.

What alternatives did you find to ‘local production for local consumption’?
We looked at the potential for local entrepreneurs to break into higher value, external markets that avoided direct competition in markets for basic consumer goods, where monopoly companies held sway. This required participation in value chains and business-to-business transactions, which introduced a whole new ball-game – a step-change in business sophistication for entrepreneurs – and a greater degree of sectoral specialisation. The hurdles were higher – but so were the success rates.

As part of this process, we initiated the development of commercial products from the indigenous marula berry, leading to the production of the first commercial marula juice product in South Africa, as part of a value chain that was built from the bottom up – creating incomes for 4,000 women in 42 villages, with MDA providing an intermediary function. We were also part of a wider NGO partnership that secured markets for marula oil with the Body Shop: linking local to global markets.

In addition, we initiated a process called ‘Bridging the Gap’, that brought together designers, retailers and craft producers, to look at how best to secure greater market access and better returns for such producers. These experiences provided deep insights into product development and the dynamics of participation in value chains.

How relevant are these lessons for development strategy today?
Partly, I wrote the book because time and again, I see development strategies confronting the issues we confronted – and repeating the mistakes we made: when the opportunity exists to build on the lessons learned instead. The book offers a deep-dive into the dilemmas that confront practitioners within the political economy of development: exploring how development discourses (and donors) sometimes fail us, and how lessons from practice can enhance theory – and strengthen development impacts.

Your title gives prominence to the issue of markets – why?
When we started, we saw worker co-ops as a socialist alternative to the conventional firm; but we underestimated the extent to which these enterprises would still have to compete in markets – even in solidarity markets. In each successive phase of strategy, our engagement with the role of markets deepened – with the emergence of the M4P approach highlighting the question: can markets be made to work for the poor – or even just be made to work ‘better’ for the poor – or is the process always, inexorably, one in which the poor are made to work for markets?

The quest for answers led to examination of theories of markets as institutions – and the insight from such theories that as institutions, they are social constructs. And if markets are social constructs, how might societies construct them differently – to lead to different social and distributional outcomes? And through what social processes might this be achieved? In a context in which markets appear to be here to stay, answers to these questions matter for any agenda of social and economic change – and so these concerns frame the final reflections in the book.

Finally – a more personal question: how did you, as a white middle-class woman, get appointed to head NUM’s development strategy during the apartheid era?
To cut a long story short, my parents ran a small, independent, anti-apartheid publishing company from our home, which meant I was exposed to authors, artists and poets involved in contesting apartheid ideology from an early age. At university, I joined the student movement; I was President of the National Union of South African Students (NUSAS) in the years that a non-racial student movement was formalised, and during which the United Democratic Front was launched – which NUSAS joined.

My detention in solitary confinement under security laws during this period was given high profile. Thereafter, I was part of the editorial collective of an alternative newspaper (SASPU National) that provided extensive coverage of local anti-apartheid struggles and that was widely distributed inter alia by the Congress of South African Trade Unions (COSATU). Writing for the paper, I engaged with activists from many trade unions and sectors. All of the above meant that – as I explain in the book – when I arrived for the job interview for the post in NUM, the process began with handshakes and greetings of ‘comrade’ all around: which is just how it was in those days.

Our Interview with Kate Philips was originally featured on the African Griot. If you would like to subscribe to our biannual newsletter covering all aspects of African Study, exclusive discounts, latest publications, brochures and more then please don’t hesitate to sign-up here.